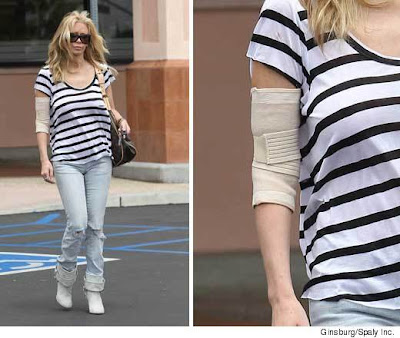 Jenna Jameson just emerged from a CVS drugstore in Huntington Beach with a medical brace on her right arm.

UFC legend / former Light Heavyweight Champion & MMA fighter Tito Ortiz was placed in handcuffs -- and then in a jacket -- when he was arrested this morning for domestic violence at the home he shares with Jenna Jameson.
Ortiz was taken to a Huntington Beach jail in Orange County, CA this morning after somebody called 911 and reported a "disturbance" in the home. 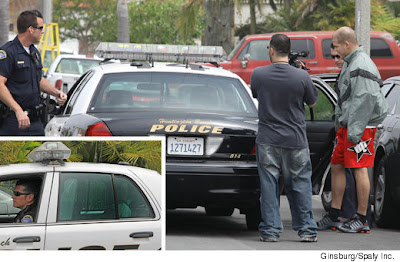 Fighting back tears, a clearly emotional Jenna was driving away from her home in Huntington Beach, CA moments ago -- when she stopped and said, "I'm gonna be alright."

Jenna -- who was wearing giant sunglasses -- continued, "My babies are alright ... everything's OK .. he's in jail."

Jenna was accompanied by her father -- the man who we've learned made the initial call to 911.
Jenna Jameson says this is the first time her baby daddy Tito Ortiz has laid a hand on her ... but she says it's going to be the last.
Outside of her home in Huntington Beach, we asked Jenna if she was going to file a restraining order against Tito ... her father said it was "already done."

Jenna also said she feels "betrayed" that Tito would "lash out at me"  -- but says her two kids are doing fine.
Jenna just announced that she's quitting Twitter, saying "I cant take any more abuse from ANYONE.. To my sweet fans...thank you"

***FOR VIDEOS: Check the video links below... 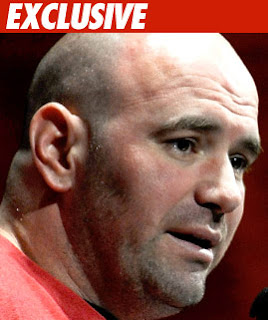 UFC President: Dana White toldTMZ that Tito Ortiz could be booted from the organization if the domestic violence charges against him prove legit.

White says, "We're gonna be fair, but we could cut him."

White wants to wait until the police reports are in, but the UFC can take action even before the legal process runs its course.  "Other than going on a killing spree, being accused of domestic violence is the worst thing you can have going for you," White says.
~~~~~~~~
MMABloodBath.com Video Blog - FREE Mixed Martial Arts (MMA) Fight Videos Streaming Online!
~~~~~~~~~ 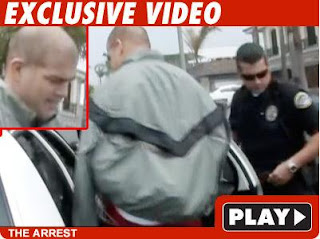 Jenna Jameson: Tito Ortiz Lashed Out at Me - VIDEO:
http://mmabloodbath.blogspot.com/2010/04/jenna-jameson-tito-ortiz-lashed-out-at.html

Most Viewed (Popular) Posts of All Time